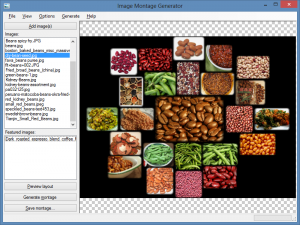 My Image Collage Generator is a Windows Forms application that uses a force-based algorithm to create tessellating patterns of images – the idea being that you can assemble a set of images of varying sizes and aspect ratios, and arrange them nicely on a canvas without having to place them manually.

I created this application primarily to demonstrate another use for force-based algorithms, however, its usefulness extends to producing aesthetically-pleasing arrangements of image thumbnails, which can be used for artistic, illustrative and summary purposes.

One thought on “Image Collage Generator”