Tag clouds are a mechanism for showing a list of topics/categories along with their relative frequencies of occurrence. This can useful for finding content on blogs, news sites, discussion boards, information systems and more. They can be textual or graphical, although the latter gives much greater flexibility and is the focus of this article.

Much thought can be given to the layout of a tag cloud. You will notice that the default WordPress tag cloud used on this blog simply lists the tags in alphabetical order and uses progressively larger font sizes to denote the more frequently-used ones. More sophisticated layouts try to position the most frequently-used tags in the center, with the least-used being furthest away. I have even explored force-directed algorithms for this purpose, although I later concluded that they were not well-suited to the problem.

The solution I ultimately adopted takes an iterative approach and uses fitness criteria to arrive at an optimal layout. It places each tag on the diagram in order from highest to lowest frequency. The position of a tag is determined only by the tags which preceded it. Starting at the center and working outwards, a position is chosen such that the tag does not collide with any previously-placed tag. Several criteria are used to compute the fitness of the solution if the tag were to remain at that position. This process is repeated for all directions (360 degrees). Each time a more optimal solution is found, the tag is moved to that position. When all angles have been exhausted, the tag will be at its most optimal position and control moves to the next tag.

The fitness criteria are as follows:

* Or some other aspect ratio

My implementation of the algorithm above takes the form of a C# class named TagCloud, which represents a tag cloud and offers methods to apply the layout and render to a screen or bitmap.

Included is the ability to specify basic visual properties such as the font face, colour and style, as well as the gradient between the font size of the tags with the highest and lowest frequencies. I also provided a way to favour a particular aspect ratio (as not everyone wants a perfectly square tag cloud), although it should be noted that the aspect ratio of the final tag cloud will fall somewhere between the desired value and 1:1 (square).

Tags are represented by the TagItem class, which encapsulates the name and frequency. They are added to an order-unimportant collection, to be sorted during the layout process.

After calling the Arrange() method, the tag cloud can be rendered to a GDI+ Graphics object representing the screen, a bitmap or a printer. The Draw() method accepts a target rectangle within which the tag cloud will be automatically scaled and centered.

To facilitate interactivity, a HitTest() method is also provided to determine the tag at the specified coordinates.

Although the algorithm contains 3 nested loops, the number of angles in the second level remains constant and thus the performance is O(n²). This can be demonstrated by progressively increasing the number of tags and measuring the number of cycles of the innermost loop: 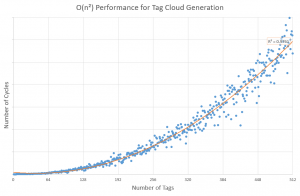 The source and binaries for this project are available on GitHub.

This implementation produces good results with reasonably good performance. I see potential for further optimisation (being able to achieve O(n log n) performance would be highly desirable!) and additional features, such as being able to vary text colour and other visual properties on a per-tag basis.