From time to time, it’s a good idea to go back and re-examine old code. With time comes greater knowledge and new tricks; and in the case of two of my earlier custom Windows Forms controls, this was certainly true. You may remember my ComboBox control with grouping support, as well as my ComboBox with a TreeView drop-down – I have revisited these controls, with particular mind to implementing what I learnt from my experience with the Buffered Paint API. 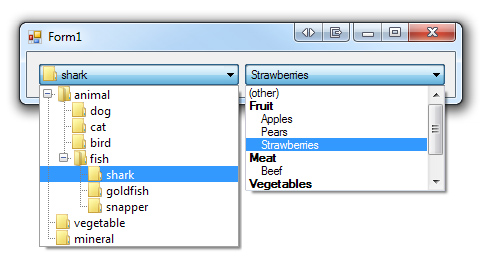 To refresh your memory, this control extends ComboBox and adds a new property; GroupMember. Using PropertyDescriptor and owner-drawing, it groups together items whose grouping values are equal.

The ComboTreeBox is a control developed entirely from scratch (i.e. its base class is Control) that uses a hierarchical/tree structure as its data representation (instead of a flat list). As such, it has behaviours in common with both ComboBox and TreeView. The drop-down/pop-up portion of the control is implemented using ToolStripDropDown, bitmap caching and custom rendering.